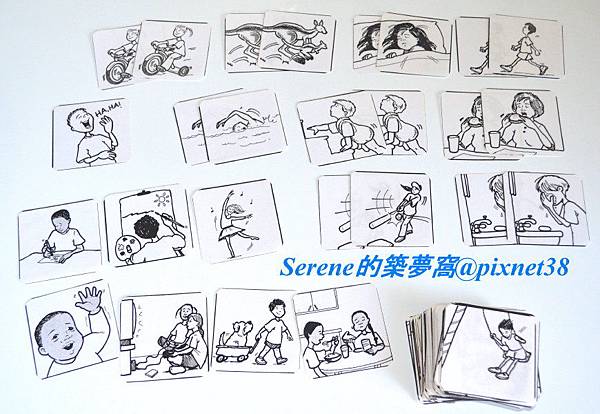 After our son was diagnosed with 2 years of language delay,

one of the activities we did with with him was playing picture cards with him.

(He was three at the time.)

The speech therapist gave us a few shets of paper that had lots of pictures on them.

We laminatedthe the sheets and cut them out into cards.

How did we play these picture cards with our son to help him speak?

We lay out some cards on the table and asked him to play a "matching game".

He had to find two cards that had the same pictures on them.

Then he had to tell us what the person/people are doing in the pictures.

After he said it right, he can continue to find another matching pair.

Our son actually found it fun to do.

it was not too difficult for him to make a complete sentence.

"They are watching TV."

Later we started to add more to a sentence.

"The girls is dancing to the music."

"A boy and a girl are eating lunch together."

"The girl is riding a tricycle happily."

This game really helped him form sentences in his head.

The first week we played this game almost everyday.

Gradually we did it every other day.

We also tried to read a lot of books to him.

Our son was a very happy child and always active.

Sometimes he was frustrated because he couldn't express himself verbally

We tried to let him play with other children his age as often as possible.

We also spoke slowly and clearly so he could hear all the different sounds.

One thing our son enjoyed very much was playing computer games,

and he was very good at it.

So we bought some educational games from the States like

Gradually he improved and was ready for kindergarten.